Case study: How to create a thriving digital classifieds section

Classifieds are an effective resource for a digital publication when bundled with a subscription.

They are particularly salient for the readers of Small Boats Monthly – a publication for the aficionados of small watercraft. Small Boats Monthly’s audience is primarily the type of people who fix up or build or experiment with one type of craft only to want to turn around and try another.

A thriving marketplace can only be a benefit to such an audience.

Which is why it was so frustrating when that marketplace refused to thrive. 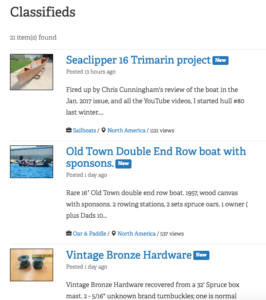 Ten months ago, Small Boats Monthly decided to try something new for their classified ads. Their classifieds required a separate traditional payment to post and as a result drew very few takers.

So they simplified. Instead of running a separate service for classified ads, they made it a benefit for their subscribers.

With the purchase of a paid subscription, you gain the unlimited ability to post classifieds.

It was a clever move – it was a snap to set up (just restrict the classified posting page to subscribers only), it made life easier for subscribers wanting to post something for sale, and it gave another incentive to purchase a subscription.

Before they made this switch, Small Boats Monthly only had about three or four people who posted ads each month. Now they have more than 20 – all interesting, relevant ads from subscribers.

In fact, some people have become subscribers specifically to post their ad.

They couldn’t be happier. It was, according to CFO Justin Jamison, “a fantastic move for us.”

Did this answer your question? Thanks for the feedback There was a problem submitting your feedback. Please try again later.